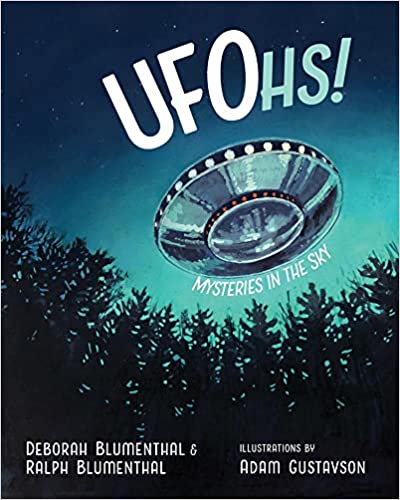 by Deborah Blumenthal  (Author), Ralph Blumenthal (Author), Adam Gustavson (Illustrator)
UFOhs! Mysteries in the Sky is the first book to explore the strange, exciting, and unknown world of unidentified aerial phenomena for kids. UFOhs! cuts through speculation and pseudo-science to describe real phenomena as observed and documented by pilots, ship captains, scientists, and ordinary men, women, and children from around the world. Playful, probing, and beautifully illustrated, UFOhs! Mysteries in the Sky prompts kids and their parents to talk about the moon, the stars, the planets, and all the things they see in the sky, and to wonder about those we can’t yet explain.

Ralph Blumenthal’s seventh and latest book, The Believer: Alien Encounters, Hard Science, and the Passion of John Mack, was published by High Road Books of the University of New Mexico Press on March 15, 2021.
The audio book came out July 13. The paperback is being published March 15, 2022. 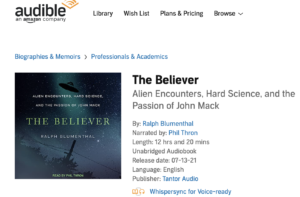 After retiring from his 45-year career at The New York Times in 2009, Ralph continues to contribute articles to The Times and other publications. He lectures on historical events and current issues. He is a Distinguished Lecturer at Baruch College of the City University of New York where he maintains a blog on a prime collection about The Institute of Public Administration and civic reformer and public administrator Luther Halsey Gulick III in the Archives of the Newman Library. https://blogs.baruch.cuny.edu/ipaprocessing/

Since 2010 he has been a journalism instructor in the international summer program of Phillips Exeter Academy in Exeter, NH.

On May 26, 2021, the National Geographic channel premiered “The Heroin Don”, an episode of “Narco Wars”, based on Ralph’s 1988 book, “Last Days of the Sicilians.” TheHeroinDon

He lives in Manhattan with his wife, Deborah Blumenthal, a children’s book author and writer of young adult novels. They have two grown daughters, Anna and Sophie, and a 12-year-old beagle/pointer rescue, Nellie.